Snow White and the Russian Prince

The theme of the ballet is self-explanatory (the well known fairy tale by the Grimm brothers together with the Russian theme). In four scenes and 41 short and varied dance numbers the popular story is unfolded in roughly an hour.

The use of compositions from various epoques - Purcell, Czerny, Beethoven and the contemporary composer L. Schady - together with the additional Russian Folkmusic creates a versatile and multicoloured ballet-music within a stylistic unity.

The easily comprehensible solo-numbers are created not only from classical ballet-dances but also from modern dance forms. The music is demanding and would certainly be pleasurable to professional dancers and musicians, but nevertheless is not beyond the capabilities of a Dance School and a good music-school orchestra.

Single numbers from the work are suitable to form a Balletsuite for Symphonic concerts. If so wished, various materials such as CD - or video productions, libretto, piano- and orchestral scores are available from the publisher Hans Sikorski.

The empty throne-room stimulates the Court Jester to a high spirited dance which is abruptly interrupted by Snow White’s appearance. She, too, believes herself to be alone and shows her joy about finding a rose.

Because he sneezed, the Court Jester betrays his hiding place, but as he and Snow White get on well, they happily dance together until the sudden appearance of the Master of Ceremonies drives them away.

The pages and Ladies of the Court prepare themselves for the visit of the Russian Prince who is passing through together with his entourage. Beforehand the Queen wants to be reassured once again by her magic mirror that she is the most beautiful woman in the whole country.

The Queen is not at all pleased by the behaviour of the Russian guests - she wants all attention solely to be paid to herself. However the Prince is fascinated by Snow White’s gracefulness, whereas she herself is greatly attracted to the Prince.

This infuriates the queen who becomes so madly jealous that she commands the Hunter to kill Snow White.

Because Snow White’s plea for mercy greatly moves the Hunter, he finds himself incapable of hurting her. Hoping that she will not be able to find her way out of the dark forest, he leaves her benumbed on the ground.

Having regained consciousness, Snow White hears a bird calling, follows it and thereby discovers the Dwarfs’ house. She is rather surprised at the various small objects scattered around, and after tidying them up, feels drowsy, and lays herself down to rest.

After finishing their work for the day, the Dwarfs return home to find Snow White asleep. They are so struck by her natural charm, that they lose all shyness. Having got to know one another, the Dwarfs decide to let her stay with them for ever.

The Elves, the Dwarfs’ guardians, happily greet this decision, and with their fluttering dream-veils provide them all with a refreshing sleep.

The Queen has been informed through her magic mirror that Snow White is still alive, and decides to murder her herself. Disguised as a wandering hawker, she tries to do it with a magic comb, but the magic doesn’t work. Then she tries to strangle her with a tight belt which she had put around her neck, but also without success. Then she tempts her with a beautiful red, but poisoned, apple. Snow White takes a bite, the poison works immediately, and she falls lifelessly to the ground. The Queen leaves in triumph, but does not notice that the Court Jester had observed everything. Although full of grief, he doesn’t quite give up all hope of saving Snow White, and rushes off to get help from the Russian Prince.

On their return home, the dwarfs find Snow White inert on the floor. They are deeply shocked and full of despair. Then they are startled by a sudden commotion, and prepare to defend themselves and do battle against anybody who wants to abduct Snow White.

After much wild running hither and thither, the Prince finally discovers the dead Snow White. He embraces her, and whilst doing so, the piece of poisoned apple which was lodged in her throat fell out of her mouth. Snow White wakes up from her deep stupefaction and returns to life. She immediately recognizes the Prince and remembers their first encounter. Full of joy and high spirits, they all celebrate the happy rescue.

In the Russian Prince’s tent the wedding takes place. Many guests have been invited, amongst them a group of gypsies who present the bride with a pair of golden shoes. Nobody realizes that in reality it is the Queen with her Ladies of Court. The Queen’s hate of Snow White is so great, that she once again tries to kill her. This time with a pair of magic golden shoes, which, once put on, will force the wearer to dance herself to death.

The Court Jester however recognizes the Queen and tears off her disguise. The Prince guessing that the Queen had an evil plan, forces her to put the shoes on herself. The magic works, and the Queen has to dance until she collapses and dies. Her companions, who up to that moment had no idea of her malevolence, are deeply ashamed and hastily leave the festivities.

Shocked by the horrifying events, the complete party of guests become totally paralyzed. The Elves, who had followed the Dwarfs, finally manage to loosen the paralysis, and so, despite the awful happenings, the wedding finally ends on a happy note! 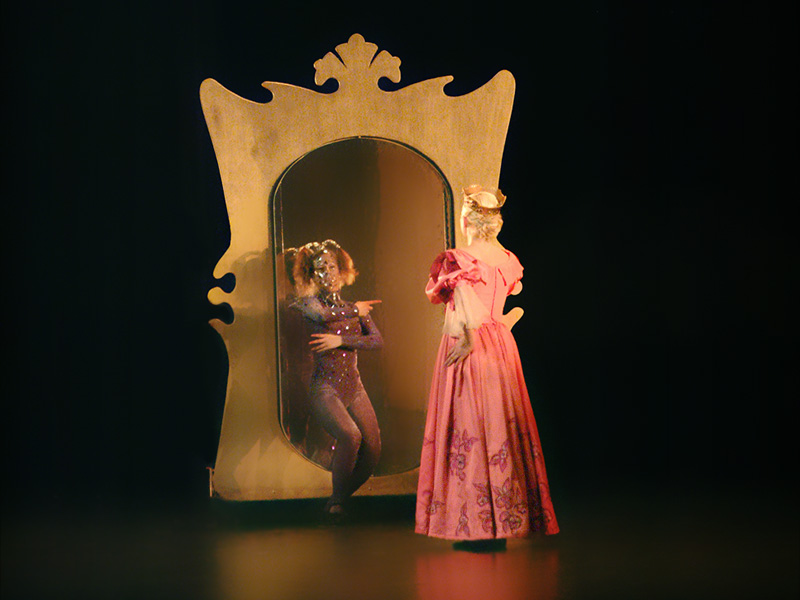 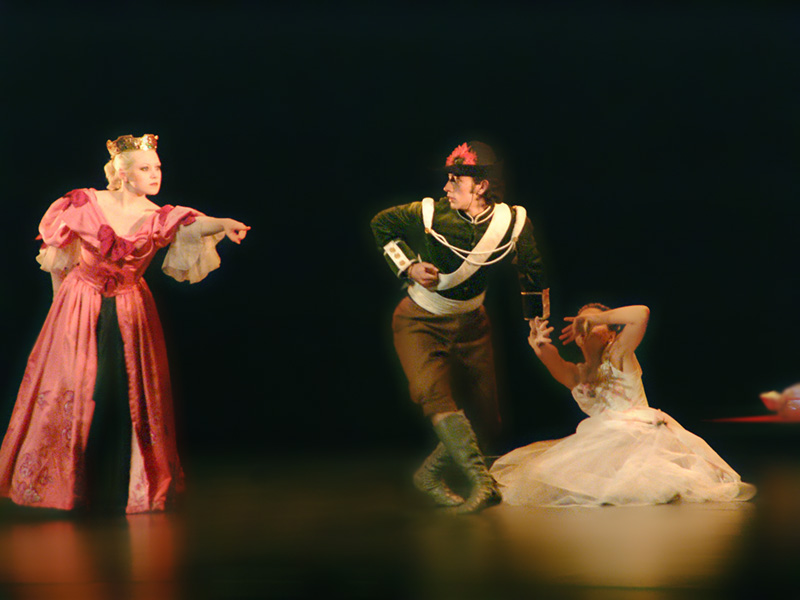 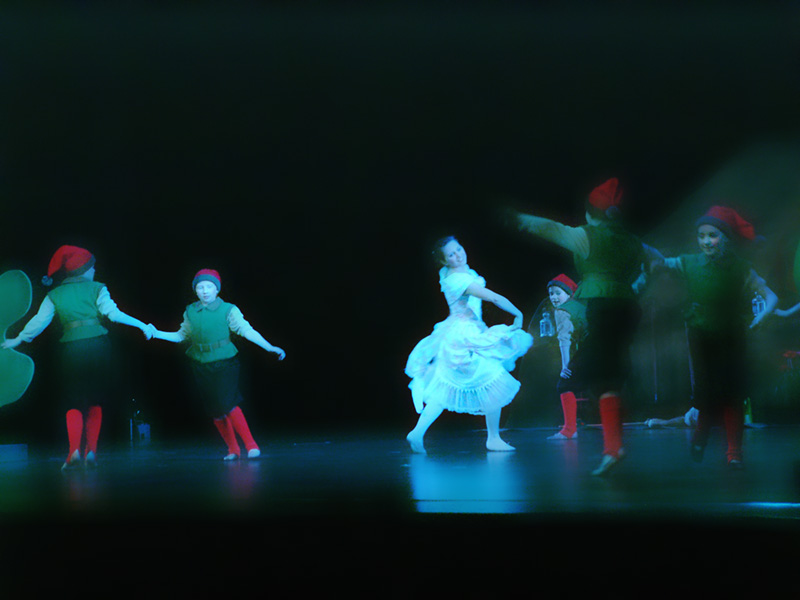 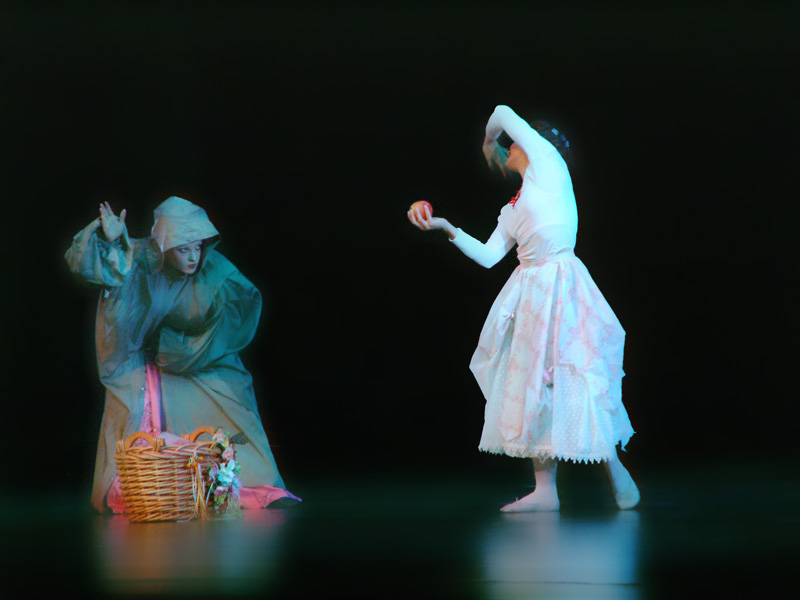 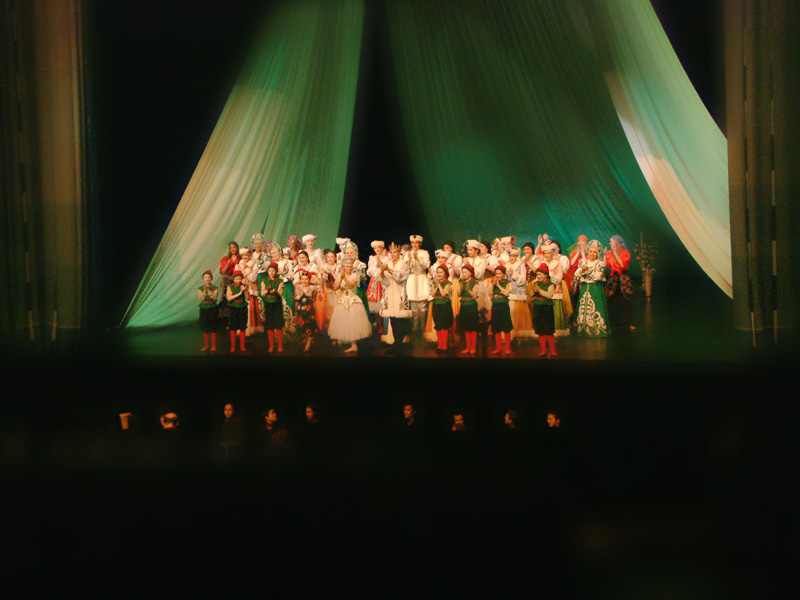